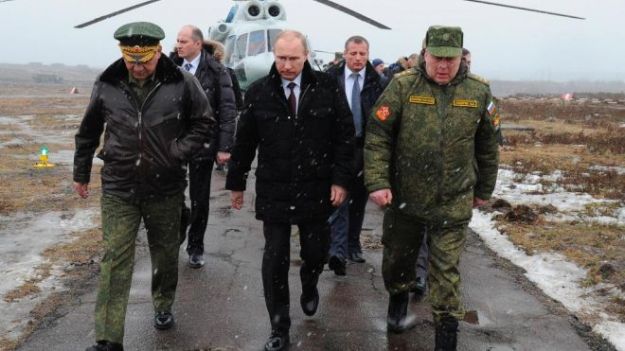 Russian President Vladimir Putin, center, and Defense Minister Sergei Shoigu, left, and the commander of the Western Military District Anatoly Sidorov, right, walk upon arrival to watch military exercise near St.Petersburg, Russia, Monday, March 3, 2014. Putin has sought and quickly got the Russian parliament’s permission to use the Russian military in Ukraine.

(Reuters) – Russia‘s Black Sea Fleet has told Ukrainian forces in Crimea to surrender by 5 a.m. (0300 GMT) on Tuesday or face a military assault, Interfax news agency quoted a source in the Ukrainian Defence Ministry as saying.

The ultimatum, Interfax said, was issued by Alexander Vitko, the fleet’s commander.

The ministry did not immediately confirm the report and there was no immediate comment by the Black Sea Fleet, which has a base in Crimea, where Russian forces are in control.

“If they do not surrender before 5 a.m. tomorrow, a real assault will be started against units and divisions of the armed forces across Crimea,” the agency quoted the ministry source as saying.