Turkey’s Prime Minister Tayyip Erdogan addresses the crowd during an opening ceremony of a new metro line in Ankara March 13, 2014.

(Reuters) – Turkish Prime Minister Tayyip Erdogan on Thursday repeated his threat to close down social media platforms including Twitter in Turkey and said he did not care about the potential backlash from the international community.

“We will wipe out all of these,” Erdogan told thousands of supporters at a rally in the northwestern province of Bursa.

“The international community can say this, can say that. I don’t care at all. Everyone will see how powerful the Republic of Turkey is,” he said.

These officials, along with another five named by the Foreign Ministry, are banned from entering the country.

The move comes in response to US sanctions imposed against Russian officials after the March-16 referendum in Crimea, which Washington considered “illegitimate.”

“In response to sanctions imposed by the US Administration on 17 March against a number of Russian officials and deputies of the Federal Assembly as a “punishment” for support of the referendum in Crimea, the Russian foreign Ministry announces the introduction of reciprocal sanctions against a similar number of US officials and lawmakers,” reads the statement published on the Foreign Ministry’s website.

The Ministry reiterates that Russia has “repeatedly” stressed using sanctions is a “double-edged thing” and it will have a “boomerang” effect against the US itself.

“Treating our country in such way, as Washington could have already ascertained, is inappropriate and counterproductive,” the statement said.

The statement continued: “Nevertheless, it looks like the American side continues to blindly believe in the effectiveness of such methods, taken from the arsenal of the past, and does not want to face the obvious: the people of Crimea, in a democratic way in full accordance with international law and UN regulations, voted to join Russia, which respects and accepts this choice. You may like this decision or not, but we are talking about a reality, which needs to be taken into consideration.”

Earlier on Thursday, 443 of 446 Russian lower house MPs voted to ratify the acceptance of the Republic of Crimea and the city of Sevastopol as new parts of the Russian Federation.

However, just like the US, the EU does not recognize the results of the referendum, in which over 96 percent of citizens voted to join Russia.

The referendum was followed by EU sanctions against 21 Russian and Crimean officials. The sanctions are due to be expanded when EU leaders meet for a two-day summit in Brussels on Thursday.

The new list of sanctioned officials includes 20 names, according to the list published by the US Department of Treasury.

Prominent businessmen Arkady and Boris Rotenberg are also on the list – as well as the Russian Railways president, Vladimir Yakunin, businessman Gennady Timchenko (head of the Volga Group) and financier, Yury Kovalchuk.

Bank Rossiya identified by the Treasury Department as the sanctioned entity will be “frozen out of the dollar,” Reuters reports quoting US officials. The bank, headquartered in St. Petersburg, has some $10 billion in assets. Several senior government officials are known to use it.

The new penalties mark the second round of economic sanctions the US has levied on Russia this week. Obama noted that the measures were being taken in the full knowledge that the move could be “disruptive to the global economy”.

The US president made the announcement just under two hours after the Russian Duma ratified the Treaty for the Accession of Crimea and city of Sevastopol to the Russian Federation.

Ukraine will play host, but the US military will call the shots, in an upcoming military exercise called Rapid Trident that will bring together some 1,300 international forces in Ukraine for a long-planned exercise.

Although the United States canceled Atlas Vision 2014, which was scheduled to take place in July in the northeastern Russian city of Chelyabinsk, the Pentagon says it will go ahead with plans for a multinational military exercise this summer in Ukraine.

Rapid Trident 2014 is designed to “promote regional stability and security, strengthen partnership capacity and foster trust while improving interoperability between the land forces of Ukraine, and NATO and partner nations,” according to the US forces in Europe website.

The Pentagon refused to provide information on the number of US forces expected to participate in the maneuvers.

US Army spokesman Col. Steven Warren said Rapid Trident is the only Ukraine military exercise the United States plans to participate in this year. The exercise is intended to help the Ukrainian military improve its troops and weapons operability with NATO forces.

Last year’s Rapid Trident, which focused on “airborne and air-mobile infantry operations,” according to a report on the Rapid Trident website, brought together 17 NATO countries for joint exercises.

According to Rapid Trident’s Facebook page, last year’s exercises involved “more than 800 pieces of weaponry and about 170 military and combat vehicles… In addition, 4 Mi -8 helicopters, a military transport aircraft An- 26 of the Armed Forces of Ukraine and a German transport aircraft C- 160 were involved to work out airborne operations and elements of evacuation of the wounded from the field of battle.”

However, given the level of hysteria that has been generated by the Ukrainian crisis, Rapid Trident 2014 will take place under entirely different circumstances than last year’s event.

The Pentagon has already dispatched 12 warplanes and hundreds of troops to Poland following the Crimean referendum on Sunday that witnessed an overwhelming majority of residents voting in favor of joining Russia.

Last week, the US military announced that the aircraft carrier USS George H.W. Bush and its group would remain in the Mediterranean Sea for a few more days than planned “to reassure US allies” over the Ukraine crisis.

On Tuesday, Russian President Vladimir Putin, together with the Prime Minister of Crimea and the mayor of Sevastopol, signed an agreement in Moscow for Crimea and Sevastopol to join the Russian Federation.

In addition to US and UK troops, Rapid Trident 2014 will include units from Armenia, Azerbaijan, Bulgaria, Canada, Georgia, Germany, Moldova, Poland, Romania and Ukraine.

Rapid Trident military exercises have been held annually on the territory of Ukraine for a number of years.

Ukraine has a partner relationship with NATO but is not officially a member.

Purchasing the item for $13,300 (£8,000) with the intention of melting it down, little did he imagine it would leave him approximately £20m better off.

The unnamed buyer had inadvertently purchased a lost and ultra-rare Fabergé egg made for Russian royalty.

Remarkably it was saved from the melting pot because no one recognised its potential by offering him more than he paid for it.

The amazing journey of the egg began in Tsarist Russia and ended up in a flat above a Dunkin’ Donuts in America’s Mid West. The egg, which has a Vacheron Constantin watch inside it, sits on a jewelled gold stand and was given by Alexander III to his wife Empress Maria Feodorovna in Easter 1887.

It was seized by the Bolsheviks during the Russian Revolution before disappearing and turning up on an antiques stall in the US a decade ago.

The unnamed buyer paid £8,000 based on its weight and the estimated value of it’s decoration of diamonds and sapphires, but was unable to get anyone to take it off his hands. 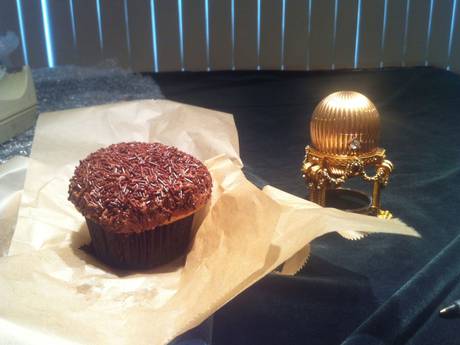 A Third Imperial Faberge Easter Egg next to a cupcake

The egg began to be a financial burden to its owner. In desperation one evening, the owner tapped “egg” and “Vacheron Constantin” into Google and a newspaper article emerged about its background.

Unable to sleep for days after recognising the egg as his, the owner flew to London to show images of it to Mr McCarthy who was left speechless.

To confirm it was not a fake, Mr McCarthy flew to the small Midwest town where the owner lived so he could be sure the egg was genuine.

When Mr McCarthy saw it on the owner’s kitchen table beside some cupcakes, he confirmed it was the lost Imperial treasure.

Wartski bought the egg for a private collector who has allowed it to be displayed for four days at an exhibition at Wartski in London from April 14.

Mr McCarthy said: “It’s the most incredible discovery. We have so many discoveries but none of them are as momentous as this.

“It has travelled from Imperial St Petersburg to the rust belt of America. It’s a story that deserves to be told because it could so easily have slipped away.

“For the Fabergé community and the historical community, it is a wondrous event because the Easter egg is the ultimate target for every antique dealer and every enthusiast.”

He added: “It may never be seen again and it may disappear into the deepest, darkest vaults of a collector somewhere.”

The egg was last seen in public in March 1902 when it was shown at an exhibition of the Russian Imperial family’s Fabergé collection in St Petersburg.

In the turmoil of the Russian revolution, the Bolsheviks confiscated the valuable egg from the empress.

It was recorded in Moscow in 1922 when the Soviets decided to sell it as part of their policy of turning “treasures into tractors”.

Its fate afterwards was unknown and it was long feared that it could have been melted down for its gold value and lost forever.

It followed the discovery of an old Parke-Bernet catalogue, and it was sold as a “gold watch in egg form case” without its provenance being known.

The revelation sparked a worldwide race to discover its whereabouts, which ultimately led to the scrap metal dealer in America’s Midwest.

The US will not get involved in a “military excursion” in Ukraine, President Barack Obama said, stressing that Washington will pursue diplomatic means in the standoff with Russia over Crimea.

“We are not going to be getting into a military excursion in Ukraine,” Obama told San Diego’s KNSD TV.

“There is a better path, but I think even the Ukrainians would acknowledge that for us to engage Russia militarily would not be appropriate and would not be good for Ukraine either.”

Obama’s comments came as the UN Security Council meeting wrapped up in New York, where Russian Ambassador to the United Nations Vitaly Churkin stressed that Russia is open to dialogue.

Churkin noted that the crisis in Ukraine began when political figures and international partners forced the country into making an artificial choice between the EU and Russia. He added that Western states still do not feel discomfort placing bets on individuals who are not ready to listen to the Ukrainian people as a whole.

At the same time, Churkin told US ambassador to the UN Samantha Power to stop insulting Russia if Washington wants to see Russia’s future cooperation in the UN Security Council. During her speech, Power accused Russia of illegally annexing Crimea.

Power “dropped to the level of the tabloid press…it is simply unacceptable to listen to these insults addressed to our country,” he said.

While speaking abut the Crimean referendum, Churkin said that a historic injustice has been righted. “The people of Crimea made their choice, and this choice must be respected.”