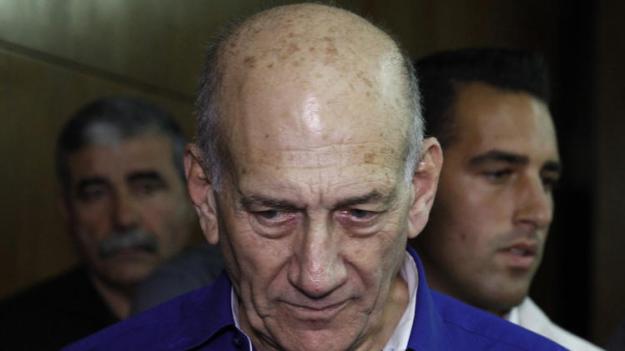 TEL AVIV (Reuters) – Israel’s ex-Prime Minister Ehud Olmert was sentenced to six years in jail on Tuesday for taking bribes in a massive real estate deal, a crime the judge said was akin to treason.

The first criminal conviction of a former Israeli head of government all but ended speculation that Olmert – a centrist credited internationally with working towards a peace settlement with the Palestinians – might return to political life.

He had denied any wrongdoing in the property deal that took place while he was in his previous post of Jerusalem mayor.

“A public servant who takes bribes is akin to a traitor,” said Judge David Rozen of the Tel Aviv District Court.

“(Olmert) is a criminal who devoted most of his time to praise-worthy public service. (But) he also lined his own pockets,” he said in passing sentence.

Rozen ordered Olmert to report to prison on September 1, effectively giving his lawyers time to lodge what they said would be an appeal to the Supreme Court and a request that he remain free until it rules.

Two years ago, the veteran politician was acquitted of most of the major charges brought against him in separate cases involving his links to a U.S. businessman.

Those corruption allegations forced Olmert’s resignation as prime minister in 2008, and his acquittal had appeared to position him for a possible political comeback.

But in the new corruption trial, Rozen found Olmert guilty on March 31 of two bribery charges and said he accepted 500,000 shekels ($144,000) from developers of the Holyland apartment building complex in Jerusalem and 60,000 shekels in a separate real estate project.

On Tuesday, the judge granted the prosecution’s request for a six-year jail term.

Olmert has made several criticisms of Prime Minister Benjamin Netanyahu‘s policies toward the Palestinians, fuelling talk about his future political ambitions.

But in sentencing Olmert, the judge said his crimes entailed “moral turpitude”, which under Israeli law would preclude him from running for any public office for seven years after finishing his jail term.

A lawyer by profession, Olmert began his political career in the 1970s as a legislator who targeted organized crime in Israel.

He served as mayor of Jerusalem from 1993 to 2003 and as prime minister from 2006 to 2009, staying in office in a caretaker capacity until after an election that brought right-winger Netanyahu to power.

As prime minister, Olmert waged war against militants in Lebanon in 2006 and the Gaza Strip in 2008.

He claimed significant progress in talks with the Palestinians aimed at securing a final peace deal, offering an Israeli withdrawal from much of the occupied West Bank. But no agreement was reached.

After a three-year break, U.S.-brokered negotiations resumed in July, but they were frozen last month by Netanyahu after President Mahmoud Abbas’s Palestine Liberation Organization signed a reconciliation deal with Hamas, an Islamist group that advocates Israel’s destruction.

Palestinians blamed Netanyahu for the collapse, citing Israeli settlement-building and his failure to carry out a pledged prisoner release.

Olmert was among 13 defendants in the Holyland case, which revolved around the construction of a hulking, hilltop housing project widely regarded as Jerusalem’s worst eyesore.

Sentences handed down on Tuesday against six of the other accused ranged from three to seven years.

In 2010, a former Israeli president, Moshe Katsav, was convicted on rape charges. He is serving a seven-year sentence.