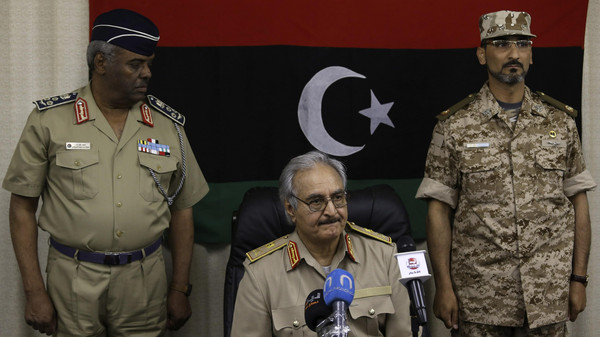 General Khalifa Haftar (C) holds a news conference in Abyar, a small town to the east of Benghazi.

(Reuters) – At least 20 people were killed and almost 70 wounded when the Libyan army and forces of a renegade general fought Islamist militants in the eastern city of Benghazi on Monday, medical sources said.

Combat helicopters belonging to forces loyal to former army general Khalifa Haftar – who wants to purge the North African state of Islamist militants he says a weak government has failed to control – supported the army in the worst fighting in months.

At least 20 people were killed and 67 wounded in Benghazi alone, hospital doctors said. Some 18 wounded were reported in al-Marj, a town east of Benghazi, where fighting also broke out, medical sources said.

Libya is in protracted turmoil three years after the NATO-backed war that ousted Muammar Gaddafi, with Islamist, anti-Islamist, regional and political factions locked in conflict.

Special army troops were also seen moving reinforcements to the area of fighting in the west of Libya’s second-largest city.

Haftar started a campaign to battle Islamists two weeks ago. Since then, public life has come almost to a standstill in the city, home to several oil companies. Its airport is closed.

On Sunday, a warplane belonging to Haftar bombed a university faculty while trying to attack a nearby Islamist camp. Two people were wounded.

The government, rival militia brigades and political factions rejected Haftar’s offensive against militants as an attempted coup after his forces also stormed parliament a week ago.

Ansar al-Sharia, listed as a terrorist group by Washington, warned the United States last week against interfering in Libya’s crisis and accused Washington of backing Haftar.

Gaddafi’s one-man rule, followed by three years of unrest, have left Libya with few functioning institutions and no real national army to impose authority on the competing militias and brigades of former rebels who have become power-brokers.

The acting prime minister, Abdullah Al-Thinni, refused on Wednesday to hand over power to a newly elected premier. The OPEC oil producer now has two prime ministers and a parliament deadlocked by splits between factions.