Volunteers of the newly formed ‘Peace Brigades’ participate in a parade in the Shiite stronghold of Sadr City, Baghdad, in defiance of ISIS

Thousands of Shiite militia marched through Baghdad, Kirkuk and other Iraqi cities in a show of the government’s force. However, extremists are just winning more ground: the Sunni fighters of ISIS have seized a town on the border with Syria.

Powerful Shiite cleric Moqtada al-Sadr called on his followers to take part in a military parade on Saturday. Hosts of Shiite Iraqis answered the call, flooding the center of Baghdad and other cities across the country.

Around 50,000 people joined the rally in the country’s capital, some armed with weapons including Kalashnikov assault rifles, shotguns, Dragunov sniper rifles, light machineguns and rocket launchers. They brandished banners with slogans reading “We sacrifice for you, oh Iraq,” “No, no to terrorism,” and “No, no to America.”

As volunteers gathered in Baghdad, Sunni militants led by the Islamic State in Iraq and the Levant (ISIS/ISIL) pushed back faltering government forces, seizing control of crucial towns on the Iraq-Syria border. Killing over 30 members of the Iraqi security forces, ISIS fighters attacked the town of al-Qaima and succeeded in taking over the town, which is home to 250,000, and the border crossing to neighboring Syria.

The militant group also made significant gains on the other side of the frontier, bringing them closer to accomplishing their aim of creating an Islamic state straddling national borders.

The border town is located on a strategic supply route, the loss of which would be a significant blow to Iraqi Prime Minister Nouri al-Maliki. ISIS has capitalized on the ongoing civil war in Syria to gather weapons and thousands of fresh recruits from around the world. Full control of the border zone would mean potential free passage from Syria into Iraq for the militants. 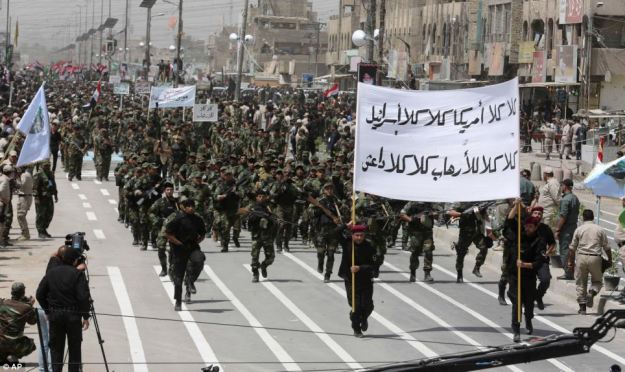 To counter the swelling ranks of the Sunni militants, Iraq’s government has officially asked the White House to deploy airstrikes in the region. In response, the White House issued a statement, saying there was no purely military solution to Iraq’s problems, and that it would consider a range of options.

As a preliminary measure, the US has deployed 300 additional military personnel to Baghdad to “assess how we can best train, advise and support Iraqi security forces going forward.”

Obama also voiced criticism of Iraq’s leadership, suggesting that Al-Maliki has endangered the country by ignoring the needs of the country’s Sunni population.

“I don’t think that there’s any secret that, right now at least, there is deep division between Sunni, Shia and Kurdish leaders,” Obama said Thursday. In addition, the Wall Street Journal reported that Washington was preparing to consult with the Iranian government over a solution to the crisis in Iraq.

The ISIS-led militants began to show signs of fragmentation on Saturday as fighters from ISIS and the Army of the Men of the Naqshbandiyah (JRTN) turned on each other in Kirkuk. At least 17 people were killed in the ensuing violence.