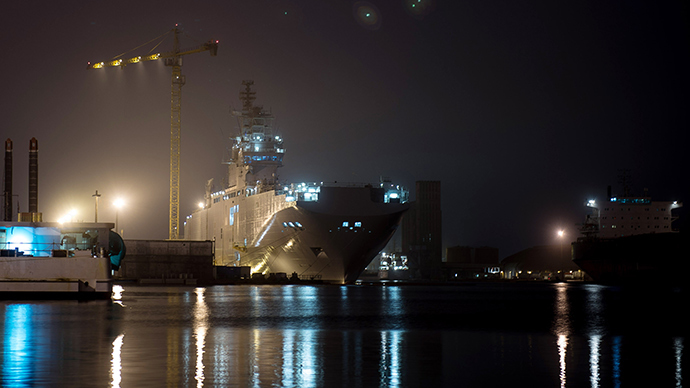 Russia won’t try and get its ill-fated Mistral helicopter carriers from France, a Russian official has announced. Moscow and Paris are set to discuss damages to be paid by France for welching on the deal.

“Russia won’t be taking them [the Mistral vessels]. That’s a fact. There’s just a single discussion underway at the moment – on the amount of money that should be returned to Russia,” Oleg Bochkarev, a deputy chairman of the Russian governmental Military-Industrial Commission, is cited as saying by RBC.

The negotiations have been “transferred into the commercial field” and “major efforts are being made today” for Russia to receive damages, Bochkarev told RIA Novosti.

France reportedly offered €748 million as compensation, but Russia turned down the proposal, calling it “laughable.”

The official also said that Russia would build its own helicopter carriers, in place of the Mistral warships, which Paris refused to supply Moscow.

“We have such vessels planned, they’re on the drawing board,” Bochkarev stressed, adding that they will be of a different class to the French-built ships as “there’s no point copying the Mistrals.”

Under the deal, Russia was supposed to receive the first of the two Mistral-class helicopter carriers, the Vladivostok, in October 2014 and the second, the Sevastopol, in 2015. But the mood in Paris went through a sea change.

In mid-2014, the French side postponed delivery indefinitely due to pressure from the US and the EU, which have imposed a set of sanctions against Moscow over the accession of Crimea and Russia’s alleged involvement in the Ukrainian crisis.

In late April, French President Francois Hollande acknowledged that Russia should get a refund if it doesn’t receive the Mistral ships.

Earlier this month, an article in the Le Point weekly magazine said the French government could end up having to pay “between €2 billion and €5 billion,” if it doesn’t fulfill its contractual obligations with Russia.

The French Navy repeatedly stated that it doesn’t need the Mistrals as they are built according to Russian standards.

Reports have emerged that the cheapest solution for France would be to scuttle the two newly-built ships as maintaining them costs an estimated €2 to €5 million every month.

A US airman is suspected of being the gunman responsible for a Tuesday morning shooting in a North Dakota branch of Walmart. The man entered the store, killed one employee and injured one other, before killing himself.

The suspected gunman, Marcell Willis, 21, is an active airman at the Grand Forks Air Force Base.

What we know about GFAFB airman who fired shots in a Grand Forks Walmart. Live from scene @WDAYnews @WDAZTV at 5. pic.twitter.com/87rbDGnW8d

Police said the shooting, which occurred a few minutes after 1:00am, leaving one Walmart employee dead and another injured, may have been random, with no link yet found between Willis, the store or the employees.

“We’ve not been able to find any linkage to him and any of the victims. That’s not to say that can’t change,” police Lt. Derik Zimmel said during an afternoon news conference, as reported by the Associated Press. “There’s no apparent motive that jumps out at this time.”

The sequence of events had Airman Willis entering the Walmart early Tuesday morning and opening fire with a handgun, killing one worker and injuring a second. He missed a third employee, before turning the gun on himself.

Andy Legg, who was in the store at the time of the shooting, told WDAZ-TV that he heard “popping sounds” shortly before authorities herded him and other customers to a safe section of the store.

“I saw people running. At that time, we heard people screaming, one yelling for help,” he said.

The workers have not been identified. Willis was given medical treatment at the store before being taken to a local hospital where he was pronounced dead.

The Air Force Base is about a dozen miles away from the city of Grand Forks where the Walmart is located.

According to police, Willis was the only person with a gun and no police officers fired a weapon. A SWAT team responded to the shooting, and searched a car in the parking lot. However, they found no threats.