Pressure on Egypt will not defeat Egyptians’ desire to succeed, said President Abdel-Fattah El-Sisi on Wednesday in a press statement after landing in Sharm El-Sheikh Airport.

“I came here to send a message to investors in Sharm El-Sheikh and Hurghada,” he said, confirming that the region is still safe for investments.

El-Sisi’s visit comes ten days after the crash of Russian airbus A321, which killed all 224 people on board while on route from Sinai to Russia’s St. Petersburg.

Al-Ahram reported that El-Sisi is visiting Sharm to discuss the repercussions of the Russian plane crash and visit tourist sites along with tourism minister Hisham Zaazou and South Sinai governor Khaled Fouda.

There are some official speculations that the plane was brought down by a bomb, suggesting lax security in Sharm El-Sheikh Airport.

“For months we have welcomed the presence of foreign experts in all Egyptian airports.” El-Sisi said.

“However, we prefer to not jump to conclusions before the investigation results are announced,” he added.

Last week, many international airlines decided to suspend their flights to Sharm El-Sheikh, but UK and Russia showed the most significant response to the crash, with Britain sending planes to retrieve thousands of its citizens from Sinai and other Red Sea sites in Egypt. British officials said it could take 10 days for all British tourists to be returned home.

Russia, which had 80,000 of its citizens in Red Sea resorts, sent 44 planes for Russians in Egypt.

Russian President Vladimir Putin decided on Friday to suspend all flights to Egypt until the cause behind the plane crash is determined. 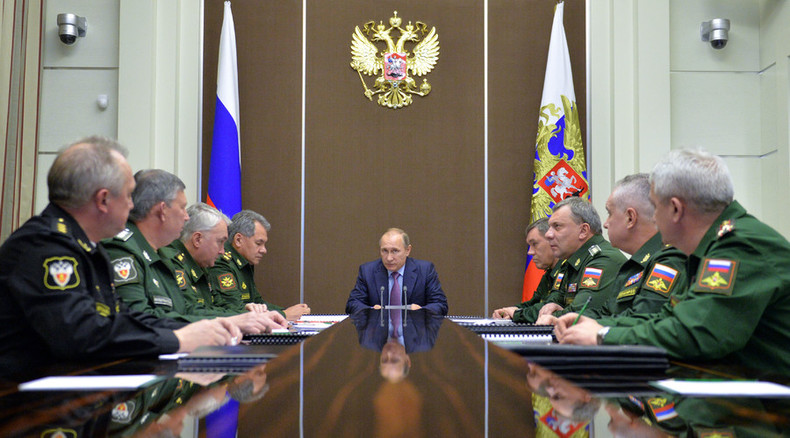 November 10, 2015. Russian President Vladimir Putin, center, chairs a meeting on the development of the defense complex in the Bocharov Ruchei residence in Sochi.

“We’re not going to get involved in some sort of arms race. Especially, chase or bypass somebody,” Putin said during a meeting on the development of Russian armed forces in Sochi.

“We just need to catch up on what was lost at the turn of the 1990s – 2000s when the armed forces and the military-industrial complex were chronically underfunded,” he added.

During the meeting, the president stressed the importance of implementing measures aimed at increasing the efficiency of interaction between the Defense Ministry and the military-industrial complex.

“Creating a modern army equipped with state-of-the-art weaponry and military hardware, of course, remains one of the priorities of military construction. In fact, it was always like that,” he said.

The amount of new and upgraded models of weaponry received by the Russian military this year has increased by over a quarter compared to 2014, according to Putin.

“It’s important that the incoming modern weaponry is extensively used” by the armed forces, he added.

The president also touched upon the issue of import substitution in the defense industry in view of the West’s sanctions against Russia.

“It (import submission) represents high-tech development of individual sectors of our industry, which should have a positive impact on the civilian sectors as well,” Putin said.

According to the State Program of Armaments, adopted in 2011, Russia will spend around $650 billion on modernizing and reequipping its military until 2020.

Earlier, this year the Defense Ministry announced there will be no cuts to the program despite economic difficulties in Russia.