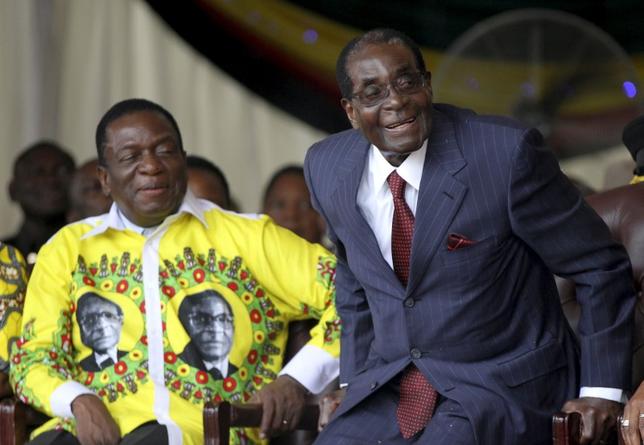 Zimbabwe’s President Robert Mugabe said on Thursday that his government would take possession of all diamond operations because existing miners had robbed the country of its wealth.

Mugabe’s comments came a week after the ministry of mines ordered all mining companies to halt work and leave the Marange fields, saying they had not renewed their licenses. At the time it denied it was seizing the mines.

“The state will now own all the diamonds in the country,” Mugabe said during a two-hour interview with state broadcaster ZBC TV.

“Companies that have been mining diamonds have robbed us of our wealth. That is why we have now said the state must have a monopoly,” Mugabe said.

The largest diamond mine in Marange, Mbada Diamonds, on Monday sued the government at the High Court and was allowed to take control of its mining assets.

Chinese-run Anjin Investments also challenged the government ban at the same court on Wednesday, according to a court application seen by Reuters on Thursday.

Mugabe said he had told Chinese President Xi Xinping during his visit to Zimbabwe last December that his government was not getting much from Chinese-owned mining companies.

“I suspect this won’t really have broad implications across the industry because Zimbabwe is a known, risky jurisdiction to operate in,” said John Turner, head of the mining group at law firm Fasken Martineau, which does a considerable amount of work with miners in Africa.

“In the last several years, though, a number of people have been saying it is time to get back into Zimbabwe because things will change and get better, so to the extent that private firms were looking at Zimbabwe thinking they were ahead of the curve, this may give them pause for thought,” said Turner, who has worked on some major asset expropriation cases in Africa.

Zimbabwe was the eighth largest diamond producer in the world with 4.7 million carats in 2014, according to industry group Kimberly Process.