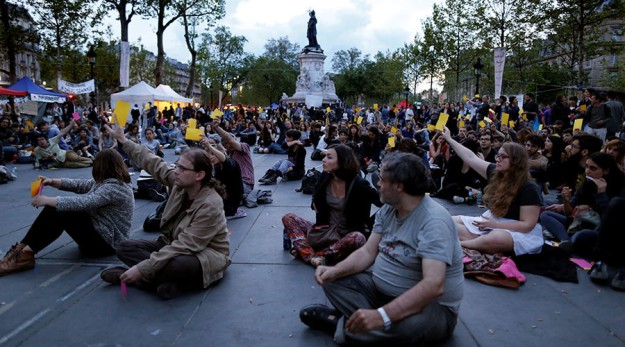 The French government is to face a no-confidence vote after it forced the highly unpopular labor bill through the lower house of parliament without a vote. The reform has caused protests across France, many of them turning violent.

Prime Minister Valls said he was not threatened by the no-confidence vote, which is scheduled for Thursday.

Passing the bill by decree comes after the French government resorted to a controversial Article in the Constitution on Tuesday in a bid to override parliament’s vote on labor reform. Article 49.3 has been used under Hollande’s administration only once to push through an economic reform last year. It has been used fewer than 90 times since its inception in 1958.

“Pursuing the debate in parliament would pose the risk of abandoning the compromise that we have built,” Prime Minister Manuel Valls told parliament.

He added that the government was trying to avoid “a disheartening spectacle of division and political posturing because of an obstructionist minority.”

The initiative to hold the no-confidence vote came from two center right opposition parties: the Republicans headed by Nicolas Sarkozy and the Union of Democrats and Independents (UDI) led by Jean-Christophe Lagarde.

In the 575-seat parliament both parties have 226 votes of the 288 that are required to “defeat” the government. But the parties have not given up and even asked the left-wing opposition to back them, a move which the minister for parliamentary elections Jean-Marie Le Guen called “inconceivable.”

Crowds of protesters gathered outside the National Assembly in the French capital once again to voice their protest against the controversial bill.

Tuesday’s move is “an insult to the people of this country” and the bill is an “unprecedented setback for workers’ rights in France, a return to the 19th century,” Up All Night organizers said in a statement, as cited by AFP.

The reform, proposed by Labor Minister Myriam El Khomri, states that employers would pay only 10 percent of overtime bonus, instead of the current 25 percent. The bill technically maintains the 35-hour working week, but says that in case of “exceptional circumstances,” employees can be asked to work up to 60 hours a week.

The proposed bill sparked huge demonstrations across the country. They have been going on since early March. The protests were called and reported on under the hashtag #LoiTravail (Labor Law).

The rallies were partially called by a Facebook community dubbed Nuit Debout (Rise Up At Night). The protests have repeatedly turned violent with officers clashing with demonstrators and police firing tear gas at protesters. Almost every rally has ended with arrests. The most violent rallies occurred in Paris, Rennes and Nantes.

The protests have resulted in injuries among demonstrators, police officers and journalists who were covering the events. French police are set to protest against the level of violence they are receiving from members of the public. A major police union says 300 officers have been hurt since the start of the year and law enforcers will stage a protest on May 18.

Sporadic anti-labor law protests in France have grown into something more substantial – now people are rallying against capitalism, the French government and intolerance, very similar to the Occupy movement in the US that turned global. 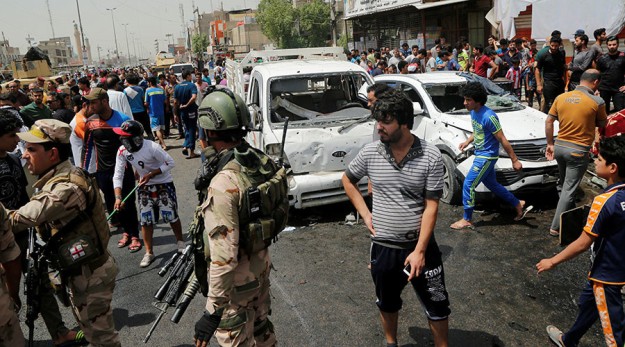 The Iraqi capital, Baghdad, has been rocked by three successive bombings that claimed the lives of dozens of civilians, according to police sources and media. Islamic State has claimed responsibility for the so-far deadliest of the attacks.

The car bombing attack in the city’s district of Sadr City killed at least 63 people and injured dozens of others, AP reported citing Iraqi officials.

An SUV rigged with explosives was parked near a beauty salon in a busy market in the Sadr City neighborhood, Iraqi police reported.

The bomb was detonated by a suicide bomber, a media outlet that sympathizes with Islamic State (IS, formerly ISIS/ISIL) reported.

The blast killed over 20 people on the spot while others succumbed to their wounds shortly after. At least 60 people were injured by the blast, and many remain in critical condition.

Shortly after the first blast, two more attacks were recorded in the city. One of them occurred in the Kadhimiya district of northern Baghdad – an area of the city considered a center of Shiite Islam. The attack claimed the lives of 18 people, Iraqi police and hospital officials told AP on condition of anonymity, adding that at least 34 people have been injured.

One more bomb that went off in the Sunni district of Jamiya killed seven and wounded at least 22 people.

The officials told Reuters that the death toll figures are likely to rise.

IS targeted Sadr City in February in a twin bombing attack, which claimed the lives of 70 people.

The group is ultra-conservative Sunni Muslim and considers Muslims adhering to other sects of Islam apostates and their enemies.

Sectarian violence remains one of the biggest security challenges in Iraq, since the US invasion of Iraq deposed its Sunni minority in power and installed a Shiite majority government.

Military officers and former officials of Saddam Hussein’s government, whose careers were ruined by the change of regime in Baghdad, were instrumental in Islamic State’s rise from a little-known Iraqi ally of Al-Qaeda to the most-publicized terrorist threat in the modern world. 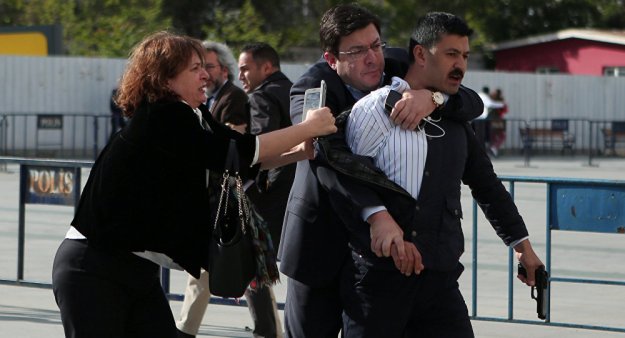 The framework of Turkey’s democratic government is on the verge of collapse; the country remains in the grip of chaos due to the political ambitions of President Recep Tayyip Erdogan, Ahmet Insel, a columnist from the opposition magazine Birikim, told Sputnik.

In an interview with Sputnik, Ahmet Insel, a Turkish opposition columnist, slammed the political ambitions of Turkey’s President Erdogan, which he claims have caused Ankara to backslide on its commitment to democratic principles, adding that his country’s political crisis shows no signs of abating.

The columnist was interviewed almost a week after an unknown attacker tried to shoot and kill Can Dundar, the editor-in-chief of the opposition Turkish newspaper Cumhuriyet, in front of a court house in Istanbul, according to media reports. 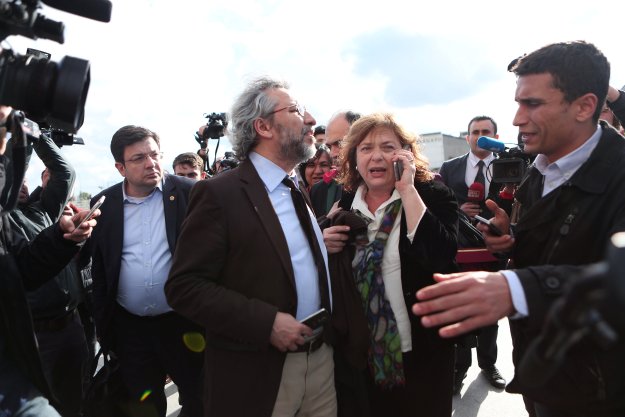 “Such cidents are a clear proof that all the nails, which earlier held together the democratic architecture in Turkey, are already rotten, and that its collapse is just a matter of time,” Insel said.

He also pointed the finger at Erdogan, whose “political ambitions and projects turned the figure of the President into the main source of instability in Turkey.”

Insel also berated Erdogan for being behind the resignation of Turkish Prime Minister Ahmet Davutoglu, which was  announced on May 6.

“By insisting on the presidential system of ruling, Erdogan, who should be the main guarantor of the Constitution, in fact violated its provisions. This very fact is sufficient to recognize the depth of the crisis and the chaos that is currently in place in Turkey. Well, the fish rots from the head,” Insel pointed out.

As for the shooting incident, it occurred after a case was heard regarding the publication of journalists’ stories about the involvement of Turkish intelligence services in transporting weapons to Syria.

The assailant came up to Dundar when he was speaking with a journalist and fired at least two shots at him. Dundar managed to escape unharmed.
“You’re a traitor!” — the shooter is said to have screamed during the incident, according to the Turkish newspaper Hurriyet Daily News.

Police standing nearby immediately intervened and arrested the assailant. In the immediate aftermath of the attack, it was revealed that another reporter, Yagiz Senkal, was wounded during the incident. 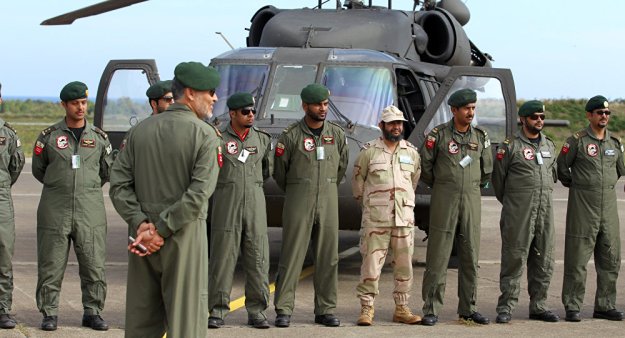 Saudi Arabia will send ground forces to Syria only if the United States decides to put boots on the ground, Saudi Foreign Minister Adel Jubeir said in an interview with a French television channel.

“If the United States sends ground troops into Syria to fight Daesh, Saudi Arabia would be prepared to send special forces alongside those troops, but we will not be sending troops unilaterally,” the minister told France 24 on Tuesday.

#Saudi FM: “if the US sends ground troops into #Syria, #SaudiArabia will be prepared” https://t.co/nejrzdTwnW pic.twitter.com/LQMhN7VvIZ

The United States and the Arab Gulf monarchy are part of an international coalition of some 60 nations that have been launching airstrikes at positions of Islamist militants in Syria since August 2014.