An alleged millitant from the Turkish Marxist-Leninist left wing organisation, the DHKP-C, holds a gun to the head of prosecutor Mehmet Selim Kiraz in Istanbul on Tuesday. A Turkish prosecutor probing the politically sensitive death of an anti-government protester was taken hostage by an armed group at an Istanbul courthouse, the Dogan news agency reported.

ISTANBUL — Two members of a banned leftist group and a prosecutor they held hostage inside a courthouse in Istanbul died Tuesday after a shootout between the hostage takers and police, officials said.

Istanbul’s police chief, Selami Altinok said police had negotiated with the gunmen for six hours before the violent end of the hostage situation.

The prosecutor, identified by the state-run Anadolu Agency and state television TRT as Mehmet Selim Kiraz, was shot in the head during the standoff and rushed to hospital where doctors tried to save his life, Turkish President Recep Tayyip Erdogan said earlier Tuesday.

Speaking in Ankara, Davutolgu said the hostage takers have been identified and had dressed up as lawyers in order to sneak in arms inside courthouse. He did not give any other new information.

Kiraz was the prosecutor investigating the death of a teenager who was hit by a police gas canister fired during nationwide anti-government protests in 2013.

A website close to the left-wing DHKP-C group said that militants from the banned organization had taken the prosecutor hostage at midday and had given authorities three hours to meet five demands, including forcing policemen held responsible for the teenager’s killing to confess to the death. 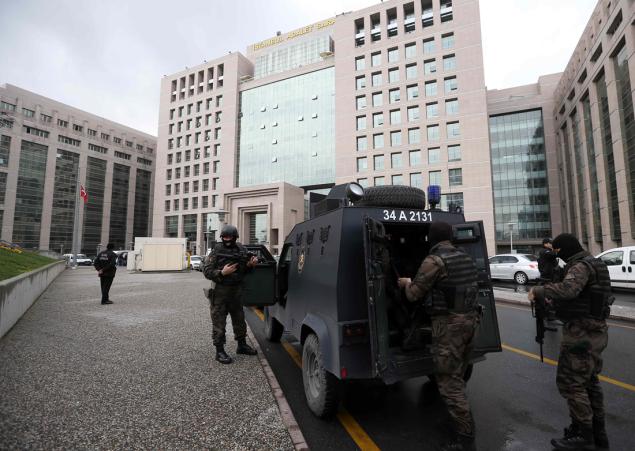 Members of special security forces stand outside the main courthouse in Istanbul, Turkey, Tuesday. Mehmet Selim Kirazis the prosecutor investigating the death of a teenager who was hit by a police gas canister fired during nationwide anti-government protests in 2013.

The group also demanded that the policemen be tried by “peoples’ courts” and for court officials to drop prosecutions or investigations against people who took part in protests denouncing the boy’s death. The website showed a picture of someone holding a gun to a man’s head with posters from the group in the background.

Deputy Chief Prosecutor Orhan Kapici confirmed that the incident was related to Kiraz’s investigation into the boy’s death.

The DHKP-C, which seeks a socialist state, is considered a terrorist organization by Turkey, the U.S. and the European Union. 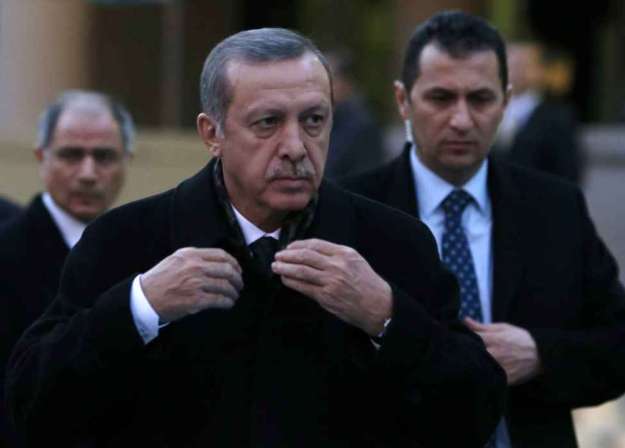 It seems that it is easier for the Turkish government to put the blame on an external source, such as the media, opposition parties or foreign governments, rather than answering legitimate questions and admitting failure on many Turkish foreign policy choices.

The media in Turkey as well as opposition parties have questioned the motives of Prime Minister Recep Tayyip Erdoğan‘s government following the shooting down of a Syrian military aircraft just a week before the local elections and the prime minister trumpeting that Turkey will not hesitate to retaliate in the event of an attack on the tomb of Süleyman Şah, a slice of Turkish territory in Syria, attracting unnecessary attention to an area that was probably unknown to many until recently, and what would appear to some as him encouraging an attack and to gain nationalist votes in the local elections.

The Justice and Development Party (AK Party) government has gone as far as having Foreign Minister Ahmet Davutoğlu accuse the Turkish media outlets of treason and acting as if they are the spokespeople of the Syrian regime.

In the latest incident, two Syrian MiG-23 warplanes were recently warned four times when they began flying close to Turkish airspace, the Turkish Armed Forces (TSK) said in a statement on Monday, and one was shot down by Turkish F-16 fighter jets in line with Turkey’s rules of engagement. Prime Minister Erdoğan and other Turkish officials say that the warplane was violating Turkish airspace by about one-and-a-half kilometers at the Turkey-Syria border.

Following the start of civil war in Syria, Turkey developed rules of engagement stating that Syrian military aircraft should not come within five kilometers of the Turkey-Syria border. The Syrian military aircraft was targeting certain terrorist areas in Kasab in Syria when it was shot down by the Turkish F-16 fighter jet, according to various press reports.

‘Aiding and abetting terrorism in Syria’

Loğoğlu also said that the move is “probably inconsistent with the principle of legitimate self-defense as enshrined in the UN Charter” and he added, “If the Syrians claim that the Syrian air force is fighting terrorists in the region, then the Turkish action, in effect, also means aiding and abetting terrorism in Syria.”

“The more disturbing problem in connection to this is that Erdoğan and Davutoğlu are daring to play dangerous games with Turkey’s national security and acting as if they seek an armed conflict with Syria,” said Loğoğlu. “This scenario, if actually a plan put in action, is aimed at diverting public attention away from the corruption and bribery allegations and is a cheap ploy to make a national hero out of Erdoğan,” he said.

The area surrounding the tomb of Süleyman Şah was relatively unknown to most Turks, until the Turkish government drew attention to it recently, saying that it is the only Turkish territory outside Turkey’s borders. Süleyman Şah, who drowned in the Euphrates River, is the grandfather of Osman I, the founder of the Ottoman Empire. The area in Syria where he is buried is considered Turkish territory under international agreements. Beginning in mid-March, President Abdullah Gül, Prime Minister Erdoğan and Foreign Minister Davutoğlu threatened anyone who targets this area with Turkish retaliation.

The Islamic State of Iraq and the Levant (ISIL) threatened Turkey, according to recent press reports, and demanded in a YouTube video that Turkey lower its flag and withdraw its troops protecting the site within three days. The video was uploaded on March 20 but has since been removed by YouTube due to its threatening content.

The criticism of the Turkish government’s foreign policy choices does not just come from within Turkey. The editorial board of the influential US newspaper The Washington Post wrote on March 25 that the Turkish prime minister is acting desperately to hold onto his power.

“Erdoğan tried and failed to shut down Twitter in his country last week. Half a million tweets from Turks were recorded in the first 10 hours after the attempted ban, including one from President Abdullah Gül. On Sunday, the Turkish military had better luck in targeting two Syrian MiG-23 planes that Turkey said briefly penetrated its airspace: One that failed to heed warnings to turn around was shot down,” said the editorial.

Erdoğan confirmed the meeting at a public rally in Diyarbakır on Thursday, saying that the wiretapping of his foreign minister’s office is “immoral, cowardly, dishonest and mean.”

The conversation in the uploaded audio recording focuses on whether the Turkish military should enter Syria to protect the tomb of Süleyman Şah. The voice allegedly belonging to Davutoğlu can be heard saying that “the prime minister said this [the area where the tomb is located] must be evaluated as an opportunity at this juncture.”

When Fidan asked in the recording why they were pushing for an attack on the tomb of Süleyman Şah, Davutoğlu allegedly responded by saying that the pretext for an incursion must be acceptable to the international community.

The Turkish foreign minister also allegedly said, “Without a strong pretext, we cannot tell US Secretary of State [John] Kerry that we need to take severe measures.” Davutoğlu then apparently added that Kerry had asked him whether Turkey was determined to strike Syria.

According to the audio files, Fidan allegedly said, “If needed, I will dispatch four men to Syria. [Then] I could have them fire eight mortar shells at the Turkish side and create an excuse for war. We can also have them attack the tomb of Süleyman Şah as well.”

Sinirlioğlu was also seemingly recorded as saying that Turkey’s national security has turned into cheap material for domestic political consumption. Gen. Güler allegedly warned, “What we are going to do is a direct cause for war.”