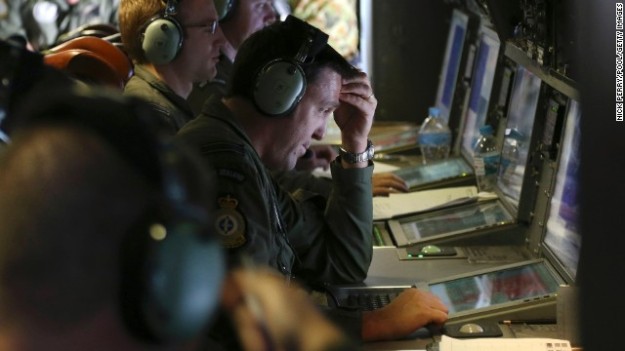 PERTH, Australia — A Chinese ship involved in the hunt for the missing Malaysian jetliner reported hearing a “pulse signal” Saturday in Indian Ocean waters with the same frequency emitted by the plane’s data recorders.

China‘s official Xinhua News Agency said a black box detector deployed by the ship, Haixun 01, picked up a signal at 37.5 kilohertz (cycles per second). However, Xinhua said it had not yet been determined whether the signal was related to the missing plane, citing the China Maritime Search and Rescue Center.

Retired Air Chief Marshal Angus Houston, chief coordinator of the Joint Agency Coordination Center – the Australian government agency coordinating the search – said Saturday the Haixun’s report of electronic pulse signals could not be verified at this time. U.S. officials from the National Transportation Safety Board and FAA were not able to confirm the report, either.

Houston also said the report of a number of white objects on the water’s surface about 90 kilometers from the signal detection area could not be confirmed to be related to the missing plane.

The deployment of Royal Australian Air Force assets to the area where the Chinese ship detected the sounds is being considered, Houston said.

CBS News transportation safety analyst Mark Rosenker, a former chairman of the NTSB, wondered why there was no report of debris from the Chinese ship that detected the signal: “When you think about what in fact they are saying, which means they believe they have the debris site where the aircraft is laying, it defies logic that we would not be seeing something on the surface as well,” Rosenker said.

But Sky News senior correspondent Ian Woods told CBS News Radio, “The reason it is being given some credibility is because even though there are many items that could be mistaken for wreckage floating round in the ocean, there is only one thing that pulses at 37.5 kilohertz, and that is a ‘black box’ recorder.”

Rosenker also said that, if the signal came from missing plane’s flight data recorder, then it could likely take weeks or possibly longer to target and recover it.

On Thursday, the British navy’s HMS Echo reported one alert as it searched for sonic transmissions from the data recorder, but it was quickly discounted as a false alarm, the Joint Agency Coordination Center overseeing the search said. False alerts can come from animals such as whales, or interference from shipping noise.

With the batteries in the black boxes’ locator beacons due to run out any day, crews are in a desperate race against the clock.

On Friday for the first time, crews launched an underwater search trying to pick up a signal from the black box flight recorders on the Beijing-bound plane before they are expected to fall silent. The batteries last only about 30 days, which would be Monday.

The search for the Boeing 777 — plagued by confusion, and agonizing to relatives of the 239 passengers — has frustrated investigators and left many wondering how long it can go on.

Two naval ships from Australia and the United Kingdom began probing the ocean along a 150-mile route on Friday that investigators hope is close to where Malaysia Airlines Flight 370 went down. The Australian ship, Ocean Shield, is towing a U.S. Navy device that can detect signals or pings from the flight data and cockpit voice recorders, commonly known as the black boxes.

The U.S. Navy’s towed pinger locator can pick up signals to a depth of 20,000 feet, and so should be able to hear the plane’s data recorders even if they are at the deepest part of the search zone, about 19,000 feet.

But no wreckage from the plane has been found, so officials cannot even be sure they are looking in the right location. The 84,000-square-mile search area, about 1,100 miles northwest of Perth, was already shifted almost 700 miles to the north after investigators decided that the plane was traveling faster than originally thought.Plus, the pinger locator — consisting of a 30-inch cylindrical microphone attached to about 20,000 feet of cable — must be dragged slowly through the water at just 1 to 5 knots (or 1 to 6 mph) in a grid pattern.

Meanwhile, up to the 11 military planes, four civilian jets and 11 ships were to assist in Saturday’s search, led by the Australia Maritime Safety Authority. Australian officials continue to refine the area where the plane entered the water based analysis of satellite communication and the aircraft’s performance.

The Malaysia Airlines jet left Kuala Lumpur on Saturday, March 8, at 12:41 a.m. headed for Beijing. But investigators believe someone re-programmed the plane’s flight management system, and two minutes after the last conversation between air traffic controllers in Malaysia and the cockpit, the plane’s transponder was turned off. The plane went dark on civilian radar, and then made a left turn back toward Malaysia.

Sources have said it followed an established aviation corridor over several navigational “waypoints.”

The Malaysian military tracked an unidentified object now believed to have been Flight 370 on its radar traveling west towards the Strait of Malacca. At 2:15 a.m., it disappeared from the military radar, about 200 miles northwest of Penang.

Investigators say the plane’s antenna signaled to a satellite multiple times over the next several hours, with the last signal recorded at 8:11 a.m., about the time the plane would have run out of fuel.

Experts says the search in the southern Indian Ocean might have been easier had the plane been outfitted with so-called “deployable black box” technology, essentially flight recorders that eject and float when a plane crashes.

The U.S. Transportation Safety Administration tested the technology, employed on U.S. Navy jets such as the F/A-18 for more than two decades, and found that it would enhance safety on commercial aircraft. But three years after the study, no U.S. commercial airline has installed the technology. The price tag per plane is about $60,000.

As the search for the missing Malaysian jet entered its fifth week, Australian Air Chief Marshal Angus Houston, head of the joint agency coordinating the operation, has acknowledged the search area was essentially a best guess.

“They might be lucky and they might start smack bang right over the top of it,” said Geoff Dell, discipline leader of accident investigation at Central Queensland University in Australia. “But my guess is that’s not going to be the case and they’re in for a lengthy search.”

Malaysian airlines have announced beyond any reasonable doubt that flight MH370 has been lost and that none of those on board have survived.

The airline has informed the relatives of those on board the doomed flight that the plane is “lost” with no survivors.

Malaysian Prime Minister Najib Razak has made an announcement, saying “It is therefore with deep sadness and regret that according to this new data, flight MH370 ended in the southern Indian Ocean.”

The Boeing 777-200 disappeared from civilian radar screens on the night of the March 8 after taking off from Kuala Lumpur with 239 people on board, en route for Beijing.

There were reports that military radar picked up an unidentified plane, after the stricken jet lost contact with air traffic controllers, which had made a sharp turn as well as descending to a much lower altitude before heading out into the Indian Ocean.

There have been no confirmed sightings of the plane or any debris that can be conclusively linked to it after an international search that has lasted two weeks. The search over the Indian Ocean entered its fifth day on Monday.

The UK Air Accidents Investigations Branch told the Malaysian authorities that the planes final location was above the southern Indian Ocean.

By this he meant satellite data automatically sent by the stricken plane, concluded that the flight ended in an air corridor over the southern Indian Ocean. 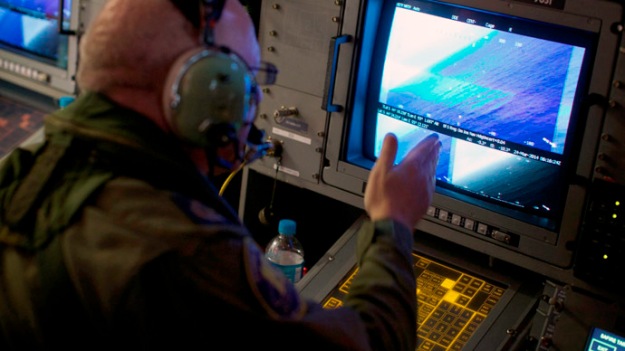 A crewman of a Royal Australian Air Force (RAAF) AP-3C Orion aircraft looks at a screen while searching for the missing Malaysian Airlines Flight MH370 over the southern Indian Ocean March 24, 2014.

Many theories have been put forward by a range of experts on what could have happened to the missing plane. One of the most convincing was by a Canadian pilot, Christopher Goodfellow, who said there may have been an electrical fire on board, which would have disabled many of the plane systems, although not all of them.

The pilots would have dropped altitude quickly and changed course to try and land the crippled plane at the nearest available airport, but before they could do this they and everybody else on board would have been overcome by smoke inhalation, while the plane flew on auto pilot before running out of fuel over the Indian Ocean.

Also earlier today a Chinese plane sighted objects in the search area, but different to those seen by the Australian air crew.

Three areas were identified for operations on Monday, totaling 20,000 square nautical miles with 10 aircraft being used.

While Australia is currently the only country to have a ship in the area, a number of Chinese vessels will arrive on Tuesday together with a further three aircraft – two from Japan and one from the UAE. 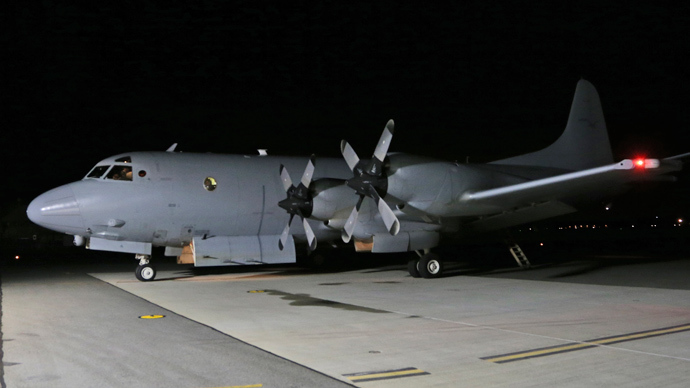 A Royal Australian Air Force AP-3C Orion sits on the tarmac in preparation for a flight to search for missing Malaysia Airlines flight MH370 in the southern Indian Ocean, at Pearce Air Force base in Bullsbrook, 35 kms north of Perth, on March 22, 2014

An Australian aircraft spotted new objects, including a wooden pallet, during the search for missing Malaysia Airlines flight MH370 on Saturday, according to Australian Prime Minister Tony Abbott.

Abbott added that some of the objects would need to be recovered before anything specific could be determined.

“It’s still too early to be definite [that objects came from an aircraft] but definitely we have now had a number of very credible leads and there is increasing hope — no more than hope — that we might be on the road to discovering what did happen to this ill-fated aircraft,” he said.

The new developments come after Chinese satellites discovered a new object in the waters of the southern Indian Ocean that may be wreckage from flight MH370. The Malaysia Airlines jetliner went missing with 239 people aboard on March 8.

China’s finding was first announced by Malaysia’s defense minister and acting transport minister Hishammuddin Hussein, who was handed a note with details during a press conference in the country’s capital of Kuala Lumpur.

The discovered object is around 22 meters long and 13 meters wide, the Chinese State Administration of Science, Technology and Industry for National Defense (SASTIND) said on its website.

It was spotted on March 18 in a remote area off the western Australian coast by China’s high-definition earth observation satellite, Gaofen-1, SASTIND said.

Flight MH370 left Kuala Lumpur on March 8 destined for Beijing, but mysteriously disappeared from radar screens around an hour after takeoff.

For the last two weeks, over 20 countries have attempted to establish what happened to the Boeing 777, but their efforts have so far proved fruitless.

In recent days, the international search switched to the southern Indian Ocean, far off Australia’s western coast, after floating objects were photographed by satellites. Australian PM Tony Abbott described the search area as “the most inaccessible spot that you can imagine on the face of the Earth.”

Six planes and two ships are currently taking part in the operation.