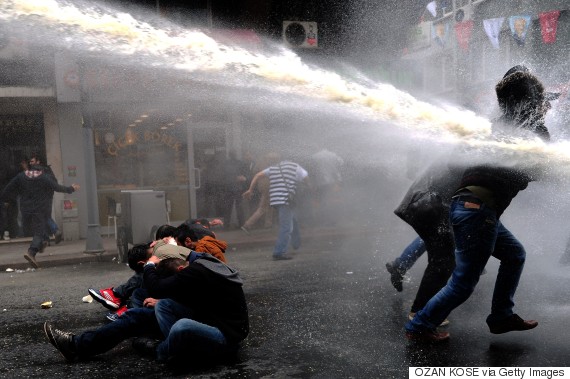 Protesters run and protect themselves as riot police use a water cannon against them during a May Day rally near Taksim Square in Istanbul on May 1, 2015

ISTANBUL, May 1 (Reuters) – Turkish police fired tear gas and water cannon at hundreds of stone-throwing May Day protesters on Friday, after they defied a ban and tried to march on Istanbul’s Taksim Square.

Europe’s biggest city was under a security lockdown as thousands of police manned barricades and closed streets to stop demonstrations at Taksim, a traditional rallying ground for leftists that saw weeks of unrest in 2013.

Riot police unleashed water cannon and chased protesters down side streets in the nearby Besiktas neighborhood and also they also fired off canisters of tear gas, a Reuters reporter said. Demonstrators lobbed stones and bottles at police and set off fireworks.

Istanbul police said nearly 140 people had been detained, although activists said the number was nearly double that. The city’s governor said 6 police officers and 18 protestors had been injured in clashes, which died out as the afternoon wore on and a clean-up operation got underway.

Critics say President Tayyip Erdogan and the government have become more authoritarian in the buildup to June elections.

“People want to express their problems but the government doesn’t want those problems to be heard ahead of elections,” opposition politician Mahmut Tanal, holding a pocket-sized book of the Turkish constitution, told Reuters in Besiktas. 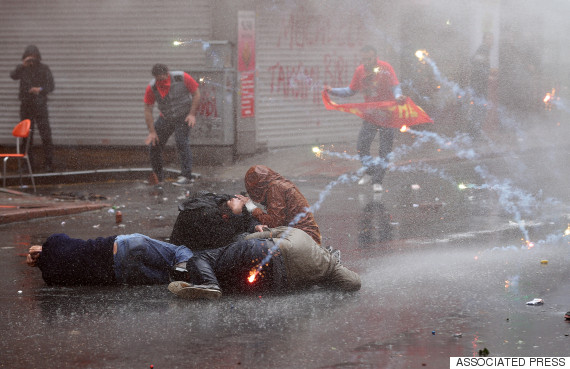 Demonstrators try to protect themselves from water, sprayed by a police water canon truck and tear gas, during clashes in Istanbul, Turkey, May 1, 2015

A usually bustling square lined with cafes and hotels, Taksim was filled with police buses, ambulances and satellite broadcast trucks. A pair of tourists emerged from a hotel to find the area sealed off and nervously made their way around police lines.

Much of Istanbul’s public transport had been shut down due to security concerns, and police helicopters buzzed over the city. Tens of thousands also gathered to march in the capital Ankara, where the mood was more festive, with dancing and singing. 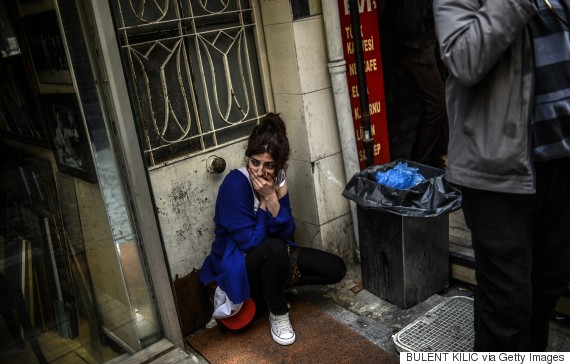 A woman reacts as Turkish police use water cannons and tear gas to disperse protesters during a May Day rally near Taksim Square in Istanbul on May 1, 2015

he government had said Taksim would only be open to those who came peacefully and not for “illegal demonstrations.”

“I wish May 1 to be celebrated in a festive mood without provocations,” Erdogan said in a statement.

Opposition parties and unions called on the government to lift the ban. 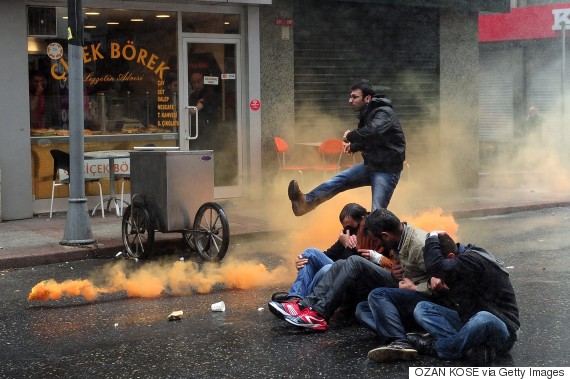 A protester kicks a tear gas canister during clashes with riot police during a May Day rally near Taksim Square in Istanbul on May 1, 2015

Erdogan has previously dismissed protesters as “riff-raff” and terrorists, outraged by the unrest in 2013 that brought unwanted international attention and posed the biggest challenge to his AK Party since it came to power in 2002.

Recent polls say AKP is on course for another election win in June but he may fall short of the massive victory Erdogan is targeting to allow him to change the constitution and bolster his presidential powers. 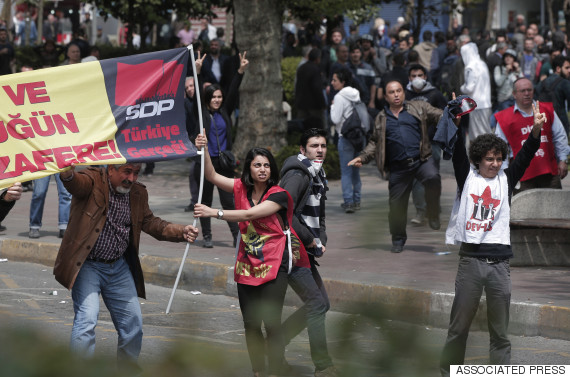 he 2013 Taksim protests began as a peaceful demonstration against plans to redevelop Gezi Park, a leafy corner of the square. After a police crackdown the demonstration spiraled into weeks of nationwide protests against Erdogan’s rule.

A protester has been killed in violent clashes with police in Turkey. The country is witnessing a wave of unrest following the death of a 15-year-old who was shot by a tear-gas canister by police last summer and died in hospital after 269 days in a coma.

One protester in Istanbul died of a head injury after police cracked down on a crowd allegedly attacking police on Wednesday evening.

Turkey is gripped by unrest following the death of 15-year old Berkin Elvan who was injured in anti-government protests last summer.

Tens of thousands of demonstrators, many chanting political slogans, gathered for Elvan’s funeral on Wednesday in Istanbul. The crowd was also chanting “Tayyip! Killer!” Earlier on Wednesday, a group of Turkish activists hacked into the Twitter account of a top adviser to Prime Minister Recep Tayyip Erdogan, posting messages like “We know who Elvan’s killer is.”

Police deployed water cannons to block the crowd from marching to the central Taksim square. Tear gas and rubber bullets were shot to disperse the people while police in riot gear chased scattered protesters into the side streets. 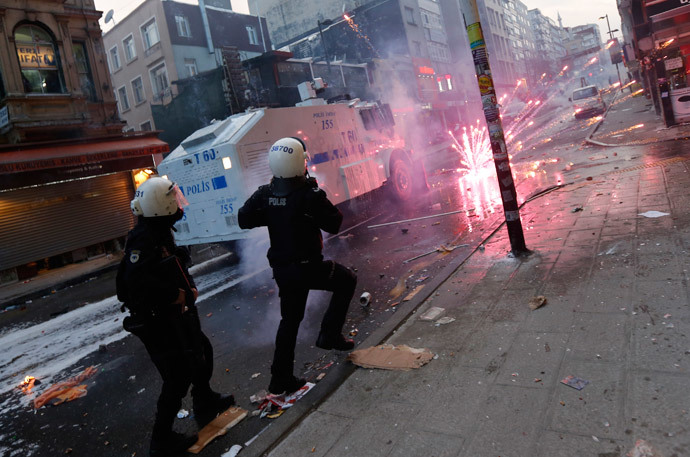 Fireworks thrown by anti-government protesters explode near riot policemen during a demonstration in Istanbul March 12, 2014.

On Wednesday, police also clashed with demonstrators in several other Turkish cities as protesters flooded the streets in acts of civil disobedience across the country. More demonstrations are planned to ratchet up pressure on Prime Minister Erdogan in the run up to the March 30 election.

Erdogan, who has remained silent on Elvan’s death, said that holding massive streets protests 18 days before elections was against the spirit of democracy.

“Does democracy come with Molotov cocktails?,” Erdogan told throngs of cheering supporters at a campaign rally in the southeastern city of Siirt, as cited by Reuters. 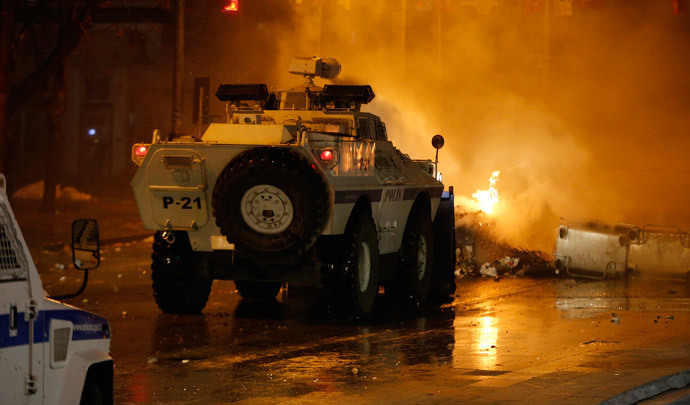 An armoured police vehicle drives through a barricade on fire during a demonstration in Ankara March 12, 2014. 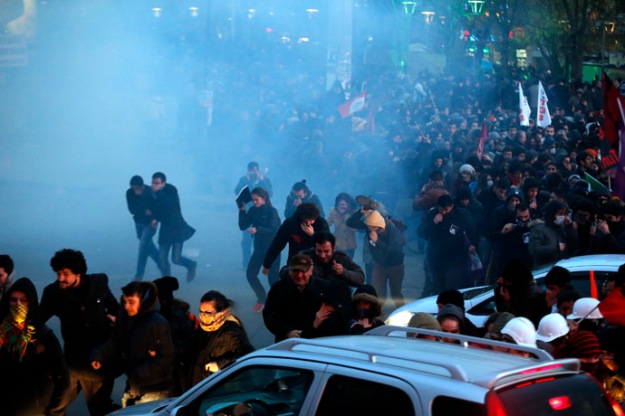 Police and protesters have clashed in several cities in Turkey as the country is gripped by unrest following the death of 15-year old Berkin Elvan. He was hit by tear-gas canister shot by police and died in hospital after 269 days in a coma.

Thousands of people took to the streets of Turkey’s biggest cities in Ankara and Istanbul after the family of Berkin Elvan confirmed his death and made the announcement on Twitter.

“To our people: We lost our son Berkin Elvan at 7am this morning. Condolences to us all,” Berkin’s parents wrote.

Hashtag #BerkinElvanÖlümsüzdür (“Berkin Elvan is eternal”) trended globally on Twitter, as news of his death spread.

Berkin Elvan became an accidental victim of anti-government protests over the Gezi Park re-development plan. On June, 16 he left home to buy some bread for his family, but on the way he was hit in the head with a tear-gas canister shot by the police during clashes with protesters. 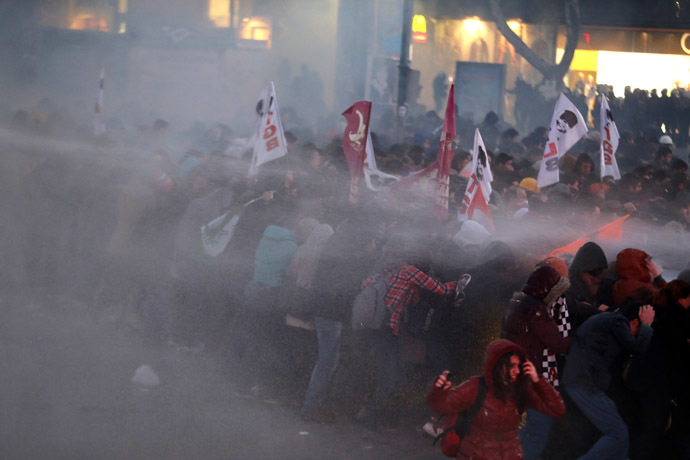 Anti-government protesters run as riot police fires a water cannon during a demonstration in Ankara March 11, 2014.

“Elvan had an epilepsy attack on March 7th, when his heart stopped for nearly 20 minutes,” the attorney told Anadolu on Sunday adding that “Berkin who was 45 kilos when he was shot, shrunk down to 16 kilos.”

Upon learning about his death about 1,000 people staged a rally outside the Istanbul hospital where the teen was treated.

Outside the hospital security forces tried to disperse the crowd as some of the mourners attacked police cars with stone and sticks while forming barricades with rubbish containers, Anadolu Agency reported.

In Istanbul police used tear gas and water cannon after several dozen protesters outside the hospital hurled stones at a police bus and stole helmets and shields, English-language Hurriyet Daily News reported. It also cited an AFP photographer, who said that one demonstrator was injured. 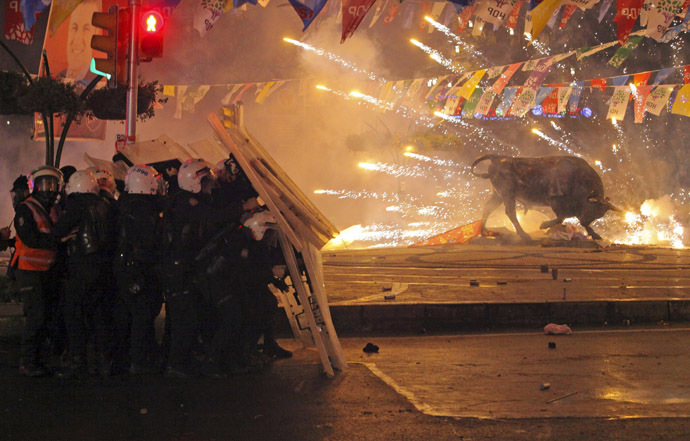 Riot policemen shield themselves as fireworks thrown by protesters explode next to the statue of a bull, during an anti-government protest in the Kadikoy district of Istanbul March 11, 2014.

The boy’s mother Gulsum Elvan has blamed the death of her son on Prime Minister Recep Tayyip Erdogan, who back in June praised the “legendary heroism” of police forces in quelling anti-government protests.

“It’s not God who took my son away but Prime Minister Erdogan,” she told reporters outside the Istanbul hospital.

Police reportedly announced that they would let the protesters give a press statement in Istanbul’s Istiklal Avenue, but they would not allow marching to Taksim Square. 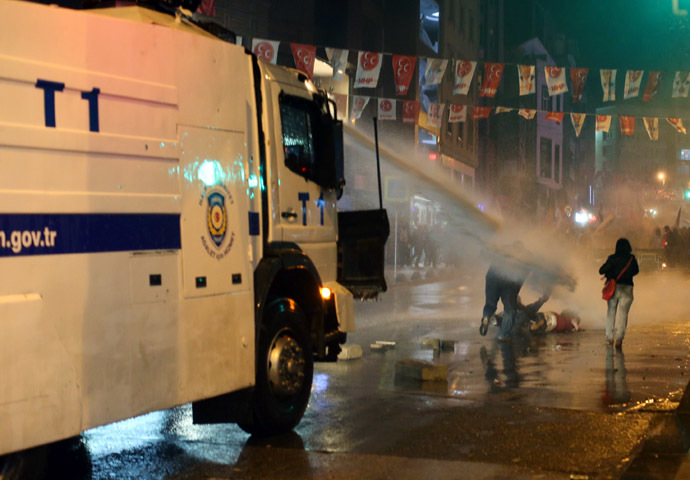 Protesters are hit by water cannon during clashes with riot police in Kadikoy, on the Anatolian side of Istanbul, on March 11, 2014.

In the capital city of Ankara around 2,000 students gathered outside the Middle East Technical University. As the crowd marched towards the headquarters of the ruling Justice and Development (AK) Party, it partly blocked traffic on one of Ankara’s main streets. 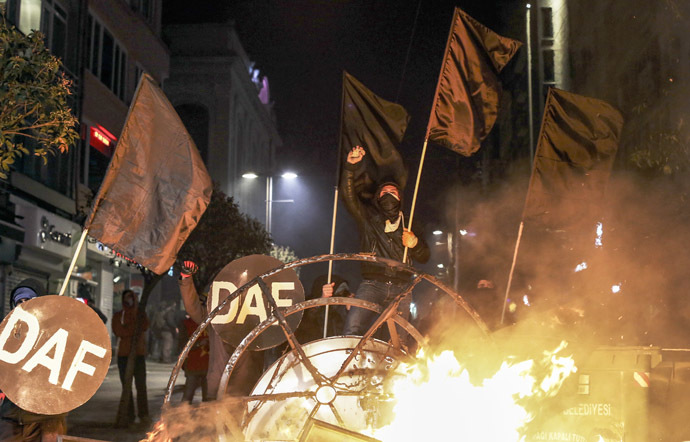 Protesters chant slogans behind a barricade during clashes with riot police in Kadikoy, on the Anatolian side of Istanbul, on March 11, 2014.

As the protesters ignored a warning from security forces, police fired tear gas and water cannons to scatter the crowd.

People in many other cities around Turkey also went on to the streets to mourn the death of the young man.

Police and protesters have also clashed in the cities of Izmir, Adana, Antalya, Kocaeli and Mersin, according to Dogan News Agency reporters on the ground. 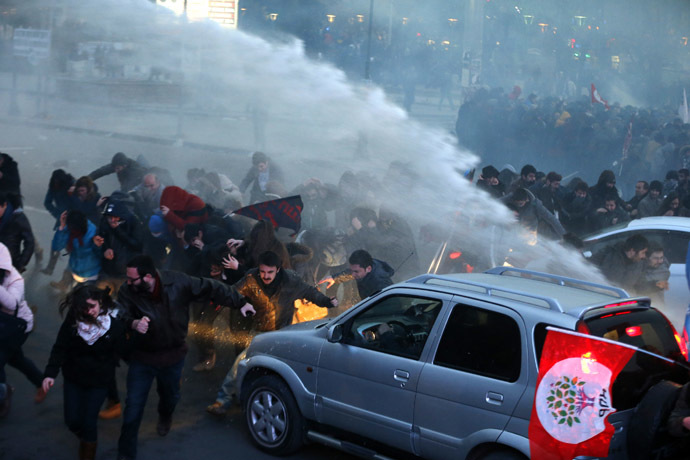 Anti-government protesters run as riot police fires a water cannon during a demonstration in Ankara March 11, 2014.